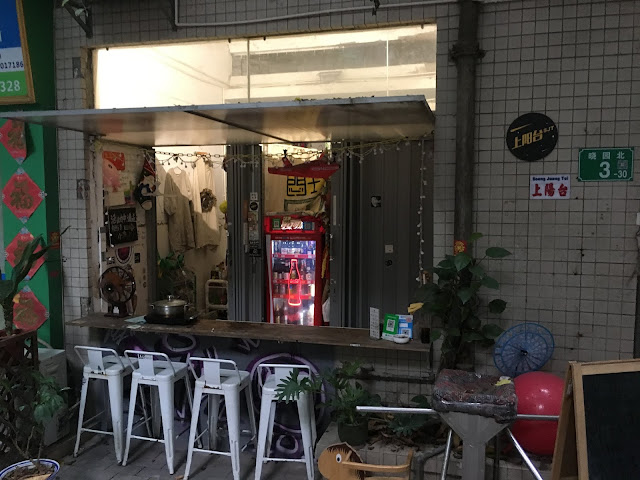 The public bar at SoengJoengToi's space in Guangzhou

In August, I visited Guangzhou's SoengJoengToi (上阳台) and HB Station (黄边站), two intimately intertwined, independently run platforms for working together on art and social engagement. I met with Liang Jianhua and Li Xiaotian, curators of HB Station as well as "project owners" at SJT, to a talk about how SJT and HB station organize as platforms for alternative art practices in contemporary China. 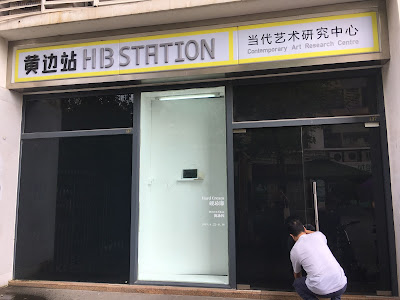 
From the outside, HB Station looks like an independent, artists run organization producing art exhibitions in a conventional, white cube art space. However, perhaps even more than being an art space, HB Station functions as a platform for thinking and sharing and for connecting people from different traits of life.

HB Station initially began as an art space for alternative art education in 2012, run by artists Huang Xioapeng and Xu Tan. Liang Jianhua explains how the set-up behind HB Station was reorganized in 2015, with a new team of people becoming in charge of the place. Many of the new team members were previously affiliated with HB Station's alternative art education program, in some sense, they took over the institution and changed it from the inside.

HB Station is now focused on exploring alternative Chinese and East-Asian art practices and milieus through their "Banyan Travel Agency," seeking out forgotten issues within Chinese art histories, bodily experiences and publications practices as yet another form of alternative education. 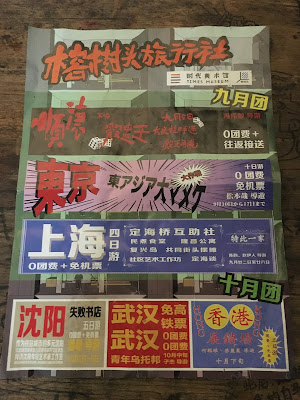 The first Banyan Travel Agency tour was organized by HB Station and funded by Times Museum and took place in 2016. They visited a community house project in Tokyo, Dinghaiqiao Mututal Aid Society in Shanghai, Shibai Bookstore in Shenyang, the people from the shut-down Our Home Autonomous Youth Center in Wuhan and artist-farmers from SangWoodGoon in Hong Kong.

The group of people that participated in the first Banyan Travel Agency tour also became the main drivers behind the wish to set up the new space that became SJT. HB Station was considered too close to the art world and too far from the city center and it was decided to find a new space that could accommodate the needs and wishes of this group of young radicals to have a place to gather and to connect with other people. In 2016, they began looking for a space and in 2017 SoengJoengToi opened its doors. 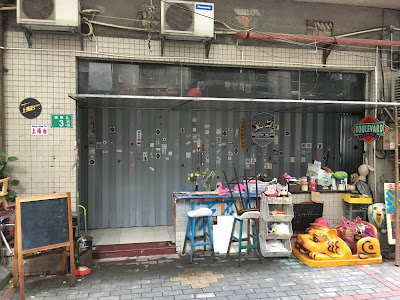 The space of SJT is more akin to an autonomous youth house. At common meetings they decide on matters of relevance to the space and the collective in general (e.g. how to handle angry neighbours or how to participate in exhibitions as an inhomogeneous collective or how to avoid being shut down by the police).

SJT is organized around various "project owners" (业主) initiating sub-projects using the space in various ways and to varying degrees and for varying periods of time. The projects include, but are not limited to, the bar at SJT, Fongfo Print Press, Fongfo Monthly Zine (冯火月刊), the Sewing Co-op (女子天团), HB Station, the Travel Agency, Banyan Space (at Times Museum), Moonlight Film Screening Project, Material Engineering Group and much more (Link to list of SJT projects in Chinese).

Being a "project owner" at SJT means for one that you contribute rent. Rent is divided on the basis of projects and not people nor the amount of space you use. Meaning that one project can have several people = low rent, while other projects are run by one person = higher rent. Most people pay rent out of their own pockets and rely on income from day-time jobs. The members of SJT are composed of a diverse group of people with only a smaller portion being affiliated with the art world. 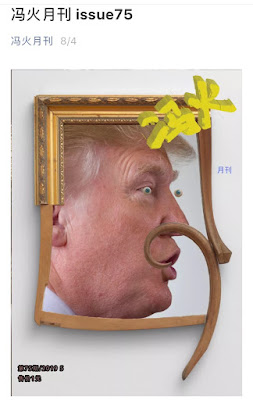 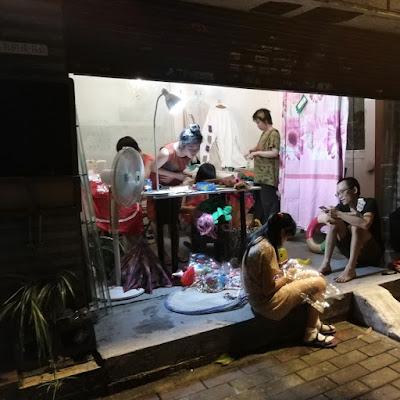 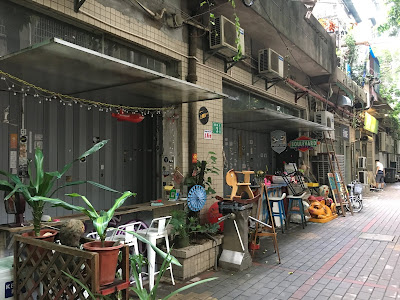 Liang Jianhua and Li Xiaotian explain, that when they refurbished the space, they moved the outer walls in by a meter or so, in order to create a roof-covered corridor outside of the actual space that would be open to everybody on the street even if SJT itself was closed. They hadn't imagined that this kind of semi-open structure would make so many people come by. 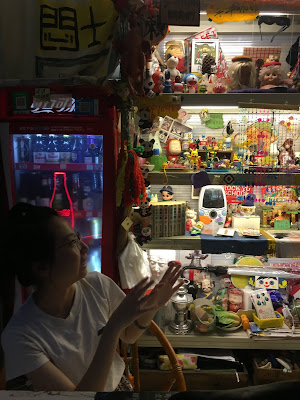 Li Xiaotian, in front of the bar fridge and SJT's collection of toys.

Pointing towards the wall behind her decorated with small toys, Li Xiaotian says that girls from the neighbourhood come and take pictures with the toys and then they chat with her about what kind of space SJT is and what SJT are doing in the area. 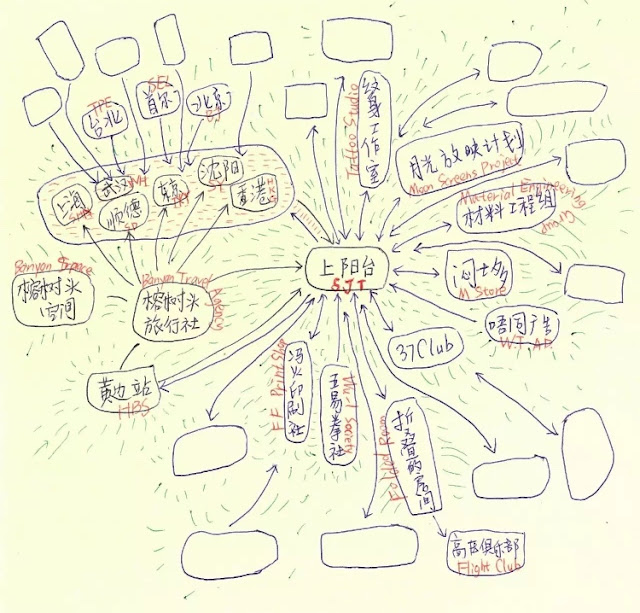 Mindmap of SJT and its projects and connections

Both HB Station and SJT are first and foremost described as "platforms" (平台，平台性) and not as spaces. Having a space seems to be a smaller part of being part of a platform, and also, physical spaces in China tend to be temporary, whereas an immaterial platform seems more resilient.

I suggest the term "platform aesthetics" (平台美学) as a more open way to understand these kinds of art practices and how they navigate. Using the platform as prism allows for the projects to have multiple expressions and channels and doesn't reduce them to only one output mode. Furthermore, these projects actively use the platform to propose a large range of ideas about community, how to connect with like-minded across East Asia, ideas of living and working together along with experimental aesthetic expressions, participation in fine arts exhibitions, publication of various printed zines and other printed matter and so forth.

Thanks so much to PhD Student Siyan Xie from Department of Fine Arts, Chinese University of Hong Kong for introducing me to SJT and HB Station. Siyan Xie is writing her PhD project on the practice of SJT.

Thanks also to Ragna Rask-Nielsen's Foundation for Basic Research for supporting my fieldwork in Guangzhou.

And thanks to S.C. Van Foundation for generously supporting my book project on socially engaged art in China.