In an article by Ou Ning on his blog at Alternative Archive entitled "Autonomi: Utopia or Realpolitik" (Chinese: 自治: 乌托邦或现实政治), Ou Ning discusses anarchism in China in a historical and contemporary context. He focuses on the anarchism of Peter Kropotkin as one of the key persons for anarchistic theory and praxis, and he draws heavily on the anthropologist and anarchist David Graeber and his descriptions of contemporary anarchistic autonomy experiments and practices with the Occupy Wall Street Movement as an example of a succesful anarchi.

Ou Ning promotes a non-violent anarchism based on direct-democracy, where elaborate discussions will lead to some sort of consensus between the implicated people. Ou Ning furthermore argues that anarchism is actually already present in contemporary societies: "[...] if you stop waiting for the wave-like spectacle of a grand revolution but instead try to enter into the minutia of everyday life, then when you enter into shared life in urban communities, when you engage in volunteer work in exchange for time coupons, when you go to the countryside to learn about labour-exchange traditions, when you observe and take part in village autonomy and grassroots democracy, or when you create indie media in cyberspace, taking part in shared proposals as an individual, then you may encounter, learn about or practise the ideas of anarchism." (Ou Ning's blog). 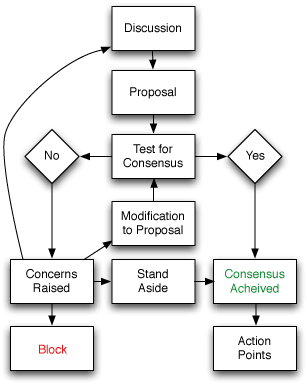 A flowchart of consensus-based decision-making, created by Grant Horwood (aka "frymaster"), Wikimedia Commons, under the terms of the GNU Free Documentation license, Version 1.2
posted by Mai Corlin Ingen kommentarer: