Demolition sites as time-keepers and sites of reconstruction 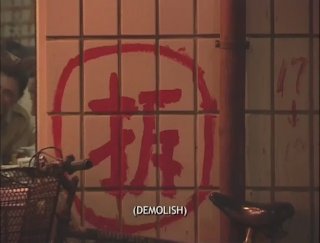 
"We know that in his work Proust did not describe a life as it actually was, but a life as it was remembered by the one who had lived it. And yet even this statement is imprecise and far too crude. For the important thing for the remembering author is not what he experienced, but the weaving of his memory, the Penelope work of recollection. Or should one call it, rather, a Penelope work of forgetting?" (Benjamin 1999: 198).

Demolition sites are places where the past becomes evident in its absence and the future is constructed on the basis of an urban imaginary often structured in the image of the past. They can be understood both as endings and as beginnings; they represent longing, nostalgia, loss, as well as dreams and aspirations about the future. In Foucault’s optic a demolition site would constitute a heterotopia,[1] a place where the other spaces and places of the city can mirror themselves. The demolition site can perform this function by connecting sites and spaces that before have been disconnected. Thus politics, history, authorities, migrants, workers are all somehow represented in this place of demolition. One should not forget, however, that the demolition site at the same time also bears witness to the manner in which violence and power are monopolized (Elias 2005: 97).

In the documentary Meishi Street (2006) we see the demolition site as a form of timekeeper of urban history, and by documenting the demolition it preserves a piece of Beijing memory, becoming a temporary museological storage glass. This specific geographic place in pending is soon to be transformed into an unrecognizable business area conditioned by political and economic perceptions of what the past ought to have looked like. It is important to note that we are never shown the afterlife of the Dazhalan-area in the documentary film itself.[2]

The Dazhalan-area is now rebuilt as enlarged two-storey hutong-buildings suitable for space demanding commercial brands like H&M, Zara, Starbucks and old Chinese brands such as Buyingzhai or Ruifuxiang Silk Fabric Store. In the planning of the new Dazhalan, the Beijing municipal government tries to mimic some of the old physical features of Beijing by “reconstructing” and revitalizing the Dazhalan-area in late Qing-dynasty style in order to recreate some of the socio-spatial features of Beijing life. They try to recreate certain chosen characteristics by reinserting their ideas and perceptions of the neighbourhood. For now it is mostly a container for nostalgia and progress instigated by political and economic considerations, but will maybe in time succeed in being the lively business centre it purports to be.

Returning to Benjamin, the Beijing Municipal Government weaves the memory of Beijing by trying to reconstruct the flourishing Dazhalan of earlier times. Demolition sites become the site of Penelope’s nightly unravelings of the weaving, whereas the reconstruction is what Penelope weaved over again the day after. Certain things are to be remembered and certain stories are to be told in the trajectory of Chinese history.


[1] http://foucault.info/documents/heteroTopia/foucault.heteroTopia.en.html
[2] Afterlife should be understood in Walter Benjamin’s translational terms (Benjamin 1999 [1970]: 72), and should also be understood in regard to Victor Hugo’s (Wong 1999: 21) idea of translation as an act of violence against the area, in its translation into something new, different or better in the words of the local governments. Meanwhile I do not wish to imply or impose with value the original features of the place.
posted by Mai Corlin Ingen kommentarer: