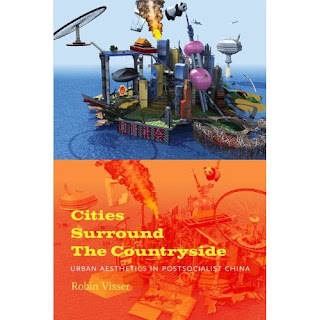 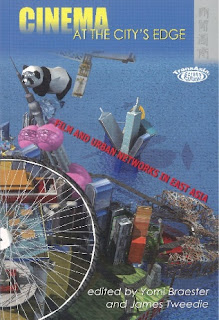 Both of the book covers presented above wear a picture of the artist Cao Fei's RMB city, a virtual city build and planned in the realm of the online game the Second Life. Not only do the books carry the same cover, but they are also concerned with much the same subjects: Cultural products and the urban in China and East Asia respectively.

The Skywalk is Gone 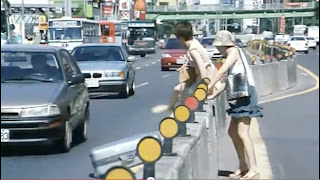 The overpass has been demolished. Still from The Skywalk is Gone

Lady: Why should I take out my ID card? I did nothing but cross the street!
Police: But you violated traffic rules.
Lady: That’s because there is no skywalk. It’s not my fault. I am willing to take the skywalk.
Police: You broke the rules, both of you. An underpass is just over there.
Lady: What do you mean by breaking the rules? How come the skywalk is gone?

Tsai Mingliang's (蔡明亮) 2002 short The Skywalk is Gone (天桥不见了) treats the urban transformations and demolitions of Taibei. The above conversation between a policeman and a lady apprehended for jaywalking shows us that the spatial memory of the lady is not subjected to the proposed law of the policeman. The spatial memory, real or not, is a part of the spatial imaginary of the city, thus adding layers of physical features to the already existing places of the city. Or as Yomi Braester puts it: "Taipei's material spaces are merely the visible part of a city mostly submerged in memory" (Braester 2010, 188). It doesn't really matter whether there is a new underpass or not, what matters is that the skywalk is gone and changing the physical features of the route and thereby also the possible physical behavior of the lady in mention.

The scene we can see on the picture above also shows a bodily transgression of the law. The ladies of the scenes refuse to conform with the new arrangement of the city and thus violate, intentional or unintentional, the 'control' of the space, they are uncontrollable! They open up new spatial trajectories by crossing the street an undesignated place.

Other signs that everything is slowly but surely falling apart is the missing ability of the police to say when the skywalk was demolished, the fact that the lady doesn't know who to ask for the underpass, because there are so many people on the street, how she looses her identity (-card) after being apprehended for jaywalking and the strange condition that the water is rationed leaving only fried rice with egg, and no soup or coffee on the menu and apparently no water in the tap either. 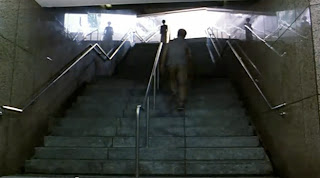 Tsai Mingliang further comments on the possible consequences of such violent urban changes by letting the two protagonists of the story walk right past each other without recognizing at all. They know each other from a previous film of Tsai Mingliang (What Time is it There? 你那边几点) taking place in that exact same skywalk that is now missing. In The Skywalk is Gone they meet in the new underpass, but fail to recognize each other. The transforming physical features makes them incapable of recognizing each others or is it themselves who are lost?